The same postcard image was often produced in black & white and various colorized versions.  The same view would also be used by different cities.  These four images of an oil gusher are assumed to be from the Lima-Indiana oilfield and captions cover the Ohio towns of Lima, Bowling Green, and Celina.  Looking close at the Celina caption, you can see where “Lima” was scratched off and the “Celina” was added below.  Similarly, the first Bowling Green postcard was originally a “Lima” postcard also.  For perhaps the record shared postcard image, used in five different states by over 15 towns:

Also entertaining is the poem written on the right-hand margin of the black & white Lima postcard, dated and postmarked in October, 1907.

“When wells are drilled in the ground. Until the gas and oil is found. With glycerin they shoot it hard. It looks just like this postal card.  Papa 10-11-07” 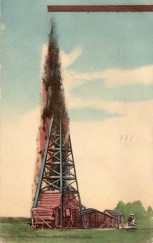 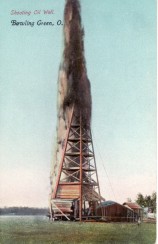