Photographer Ralph Russell Doubleday (1881-1958) is not generally known for his oilfield photography. The Rodeo Postcard King is credited with producing over 30 million real photo postcards (RPPCs) of predominantly rodeo scenes during his 58-year career as a photographer.  He was born Edward Cochran in Canton, Iowa. He died in Council Bluffs, Iowa on July 1, 1958.  As early as 1910, he had changed his name to Doubleday.   Supposedly he told a nephew that he chose the name because he felt that he worked 24 hours a day (www.nationalcowboymuseum.org/research/findingaids/collections/doubleday.aspx).  In his early 20s, Doubleday worked as a photographer for Underwood & Underwood, publishers of stereoviews.

Freelancing at the Cheyenne Frontier Days rodeo in August, 1910, Doubleday photographed a rider being thrown by a bucking horse; the first photograph capturing such a view, according to Doubleday. With his success at rodeo photography, he soon started his own business.  Doubleday’s early real photo postcards bear the copyright notice “D.F.P. Co. Inc.”  This was an early partnership of Doubleday-Foster Photo Company of Miles City, Montana.   In later years, this notice would become “R.R. Doubleday” and later, simply “Doubleday.” 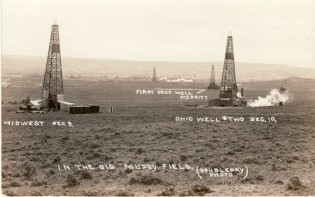 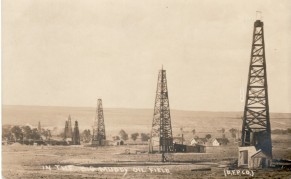 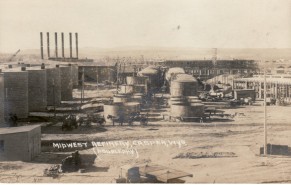 Doubleday’s oilfield scenes include oil derricks, refineries, and boomtown scenes from Texas, Oklahoma, and Wyoming from about 1919 to 1931. Shown here are some Doubleday Wyoming real photo postcards of the giant Standard Oil refinery in Casper (opened in 1914), the Midwest Oil Refinery (opened in December, 1911), and two views of the Big Muddy oil field (discovered in 1916).

Drugstores, souvenir shops, and over 200 Woolworth stores sold Doubleday postcards. By far the majority of his postcards were rodeo scenes, but he also photographed parades, natural disasters, Native Americans, town scenes, buildings, and scenic views. Will Rogers supposedly wrote that Doubleday’s name on a rodeo postcard was like “sterling” on silver.