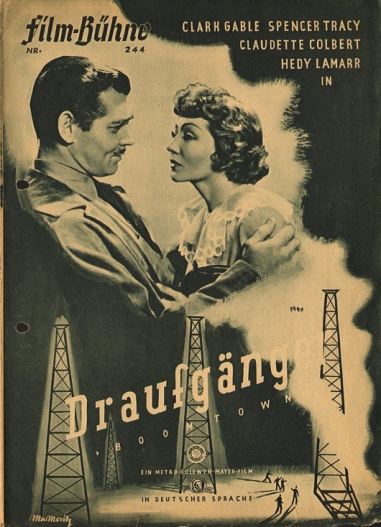 One of the best-known oilfield movies, Boom Town (1940) starred Clark Gable, Spencer Tracy, Hedy Lamarr, and Claudette Colbert. A Cosmopolitan magazine article, A Lady Comes to Burkburnett was the inspiration for the movie. The Burkburnett oil field, discovered in 1912, is located ~15 miles north of Wichita Falls, Texas near the Texas/Oklahoma state line. Many wells were drilled within the town site. A color still shows a scene from the movie in which Spencer Tracy and Clark Gable suit up in early burlap firefighting gear with a blazing oilfield fire in the background. On the reverse of this photograph, within a typed section entitled, “Story in pictures of Boom Town,” is the sentence, “Wherever men seek sudden and fabulous wealth from Mother Earth there is action and thrills.” Promotional postcards showed the movie’s four stars on the front and local theater information on the reverse. As with many American films, Boom Town was released in other countries.   Promotional material for the German version, Der Draufganger, includes a four-page program.