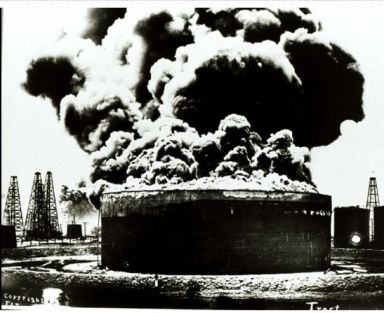 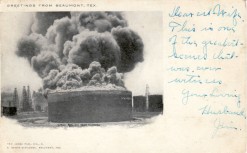 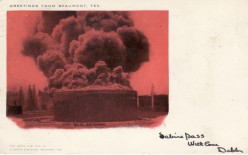 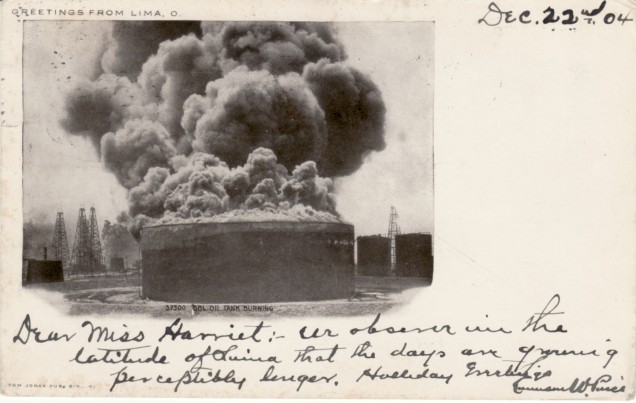 Frank Trost (1868-1944) of Port Arthur, Texas photographed early scenes of the Spindletop oilfield (discovered in 1901), including the famous photograph of the Lucas Gusher. His other Spindletop views were of oilfield fires, derrick scenes, and other gushers. Trost became known as “The Gusher Photographer.”

Many of Trost’s photographs were copyrighted and produced as postcards. Several have labels stating that they were produced by the Tom Jones Publishing Company of Cincinnati, Ohio, and sold by the Szafirs Stationers of Beaumont, Texas.  The Tom Jones Art Publishing Company was a printing and engraving company from 1900-1917.  The company also published scenic souvenirs and postcards.

Trost’s photograph of a burning oil storage tank near Spindletop was included in the 1906 USGS Bulletin #282 (Plate IV) and the caption identifies the scene as a September, 1902 fire. This photograph was produced as a postcard, in a “stained” red version and in black and white; both captioned, “Greetings from Beaumont, Tex.”  Another version of this postcard has a title of “Greetings from Lima, Ohio.”

The postcard scans here include the two Beaumont versions; the black & white is postmarked 9/8/1904 and the red stained is postmarked 5/4/1905. The Lima version is postmarked from Lima on 12/22/1904 (also dated on the handwriting).