“Thunder Bay” (1953) brought offshore drilling for oil to the big screen; the very big screen, as the movie was Universal Pictures first wide-screen format film. The movie also premiered with a new three-speaker stereophonic sound system (http://www.tcm.com/this-month/article/99364%7C0/Thunder-Bay.html).  The plot involves two ex-Navy buddies, Steve Martin (James Stewart) and Johnny Gambi (Dan Duryea) trying to be the first to strike oil in offshore Louisiana (1946), and the resistance from the local shrimpers.

The movie was filmed on location near Patterson and Morgan City, Louisiana using the fictional town name of Port Felicity. Filming also took place on an oil barge 30 miles offshore and a few scenes were shot in New Orleans.  Louisiana newspapers covered the filming of the movie during the fall of 1952.  Stewart (1908-1997) described “Thunder Bay” as a Western with boats and oil instead of horses and guns.  During the filming of the movie, co-star Dan Duryea (1907-1968) took a fall from the roof of a tugboat wheelhouse, resulting in bruises, contusions, and a broken rib (The Times, Shreveport, LA 10/17/1952). The Town Talk (10/13/1952) reported that, “The cast of the movie ‘Thunder Bay’ was left high and dry this week at Morgan City, La.  The movie is being filmed by Universal-International.  The film studio had rented a fleet of boats to film a sequence.  But shrimpers had gotten wind of a bonanza catch in the Gulf. So they lit out for the high seas.”

The movie premiered at Lowe’s State Theater, New York City, on May 19, 1953. The many varieties of movie posters, lobby cards, and advertisements for the movie show oil rig scenes, often with catchy captions such as, “The mighty story of the man who fought for the biggest bonanza of them all,” “The hard-hitting story of the adventurers who seek oil under the see, and “A hurricane’s fury before him, a hate-crazed mob at his back and a bayou woman in his blood.” Several movie trailers and film clips of “Thunder Bay” can be found on YouTube.

Cemetery view: “Photo by Holdren.” Not postmarked or dated.

On reverse: “Where the oil derrick is is the new part of Millertown Cemetery across the road from the old one. Tony (?) was buried in the corner this way.  Eva near in the middle and close to the road fence.”

Millertown is in Perry County, Ohio, just west of Corning and approximately nine miles east of New Straitsville. Oil was first discovered near Corning in 1891 and New Straitsville in 1909. 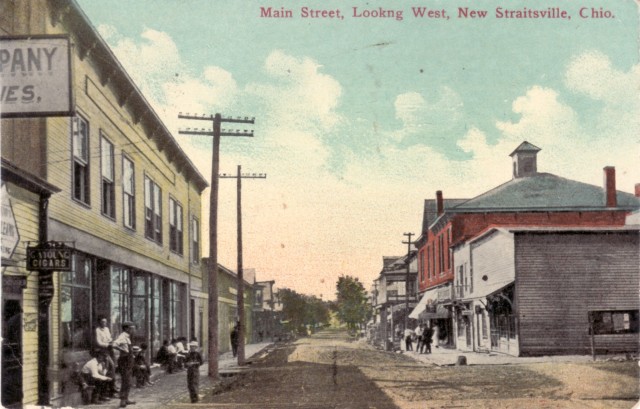 “The Pupier brand was created in Saint-Etienne, in the 1860s. The founder, Jean-Louis Pupier handed over the company to his son Joseph in 1895 and in turn, his grandsons Adrien and Marcel Pupier succeeded their father in 1919 to continue the company tradition.” http://www.cemoi.fr/en/our-products/our-brands/

The company included trade cards in with their products. When collectors completed a full set of cards, they could redeem them for a gift.  In 1938 the company issued a series of chocolate trade cards with the theme of countries of the world.

Here are two examples of oil-related chocolate trade cards:  a Russian view and an Iraqi view.  The reverses of these two cards suggest different sets/series, but one of these may have been from that 1938 series.

This postcard caption describes a steamship towing crude oil on the Aller River  near Wietze, which is near Hannover, Germany. The postcard was postmarked in July, 1921 at “Celle” the district that Wietze is located in.  The below quoted text describes some of the area’s petroleum history.

Celle has been a center for the oil industry by tradition since “black gold” was first found in this area: the Hunäus-Well – drilled 1858 – started the oil & gas production in Germany. The historic spot and the history of oil & gas production is shown in the exhibition of “Erdölmuseum” (oil museum) in Celle County. Since then, Celle has become a leading center for the development and production of drilling technology for oil, gas and geothermal wells – which is why Celle is sometimes called the “Houston of Europe”. 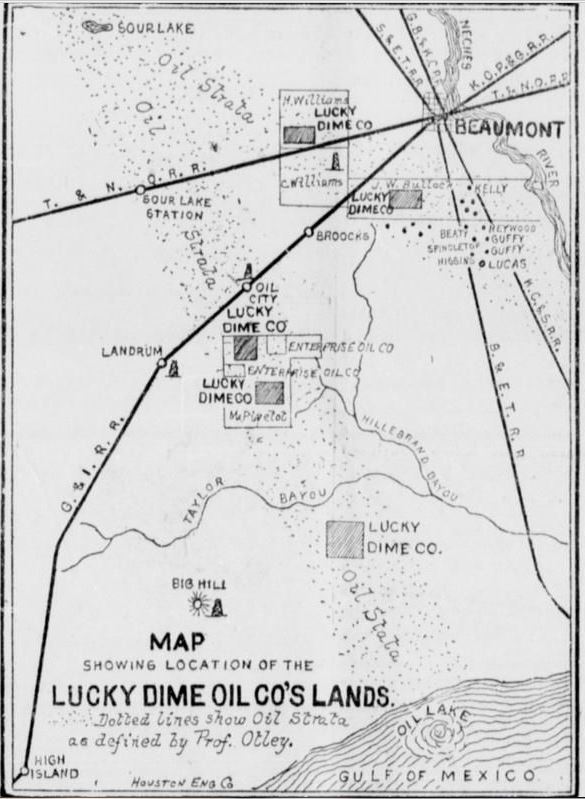 Walden, Colorado is located in Jackson County, approximately 100 miles west of Fort Collins. Continental Oil Company completed an oil well in late 1926 and another the following year with surface location elevations of 8200 and 8237 feet.  Many additional wells were drilled in this McCallum oilfield, although it was approximately 40 years later before another McCallum field well had a surface location higher than the 8237 feet.  The current highest well in Colorado is in Gunnison County at an elevation of 11,740 feet.

Thanks to friends and fellow PHI members Tom Sperr and Matt Silverman. 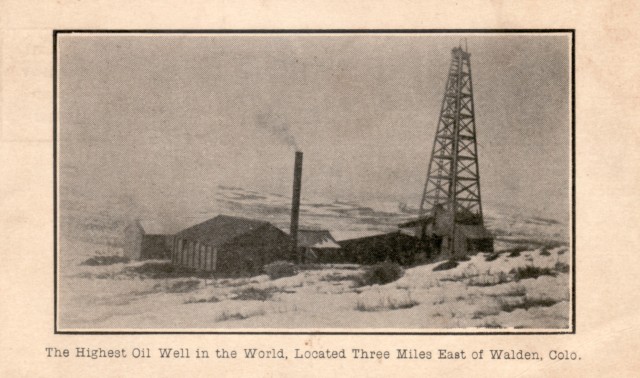 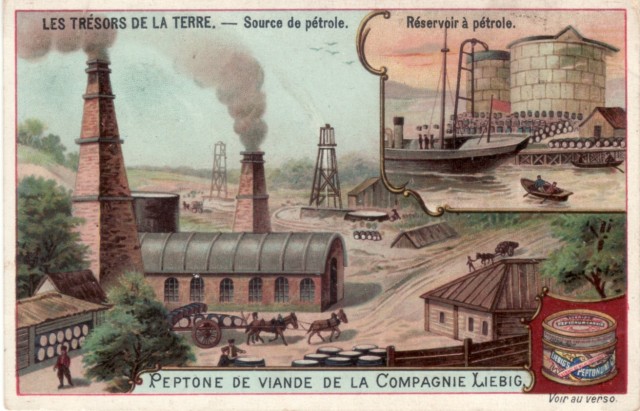 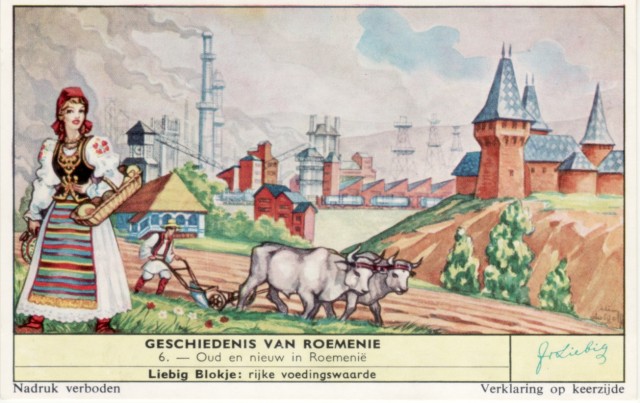 The Liebig Company, a producer of meat extract pastes and bouillon cubes, began producing advertisement cards in 1872. The average size of the Liebig cards were 110 mm x 80 mm, larger than the popular cigarette cards of the time.  The cards were produced using chromolithographic printing techniques until approximately 1940, but the company continued to produce cards until 1974.    The highly collectible cards were first given to customers over the counter, but later the cards, often produced in themed sets of six, were given to customers in exchange for coupons that the customers cut out from the product wrappers.

The cards were issued throughout Europe and often in multiple languages, including French, Dutch, German, Hungarian, Italian, and Flemish. It is estimated that there were over 11,000 different Liebig cards produced with the total number of sets exceeding 1850.

Ten great chapters bursting with color photographs, charts, and maps.  A special section that includes 72 “Great Places to View Texas Geology” will become the geologic “bucket list” for many Texas geologists and others interested in the mountains, hills, and plains of Texas.

These two postcards are of Japan’s Nishiyama oil field. The two-view postcard (postmarked in 1927) shows “Nippon’s Nishigasaki Rotary No. 1 Flowing.” This same view is captioned, “Well about one mile from Nishiyama field, the oldest field in Japan.  All gasoline produced in Japan is refined from oil in this field.  Note the thatch covering over derrick timbers” (Mining and Oil Bulletin, June, 1920, p.407). 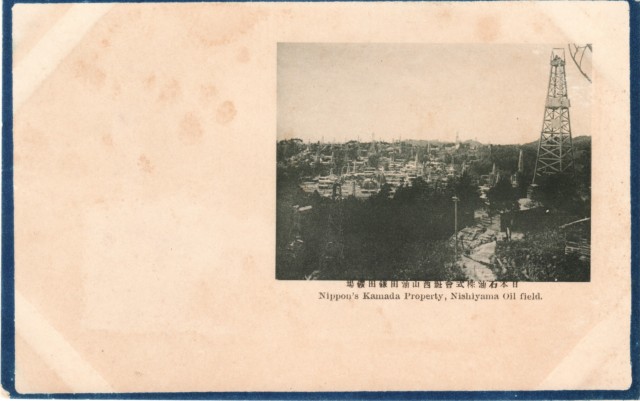